This month’s blogger interview is with Addison Cooper of Adoption at the Movies. Addison is the first of our interviewees to have a professional, rather than personal, connection to adoption. As you’ll read below, his interest in exploring adoption themes in movies was sparked by his time as a social worker. He thinks movies are a great tool for starting conversations about adoption with kids–we agree!

Tell us about yourself and your connection to open adoption.

Before I started writing “Adoption at the Movies,” I was a fost/adopt social worker in Southern California. Our adoption division was so new, and I was one of the first workers assigned to the adoption department; because of this, I was able to write a good deal of the training materials that the agency used. I asked to write the openness curriculum. As I researched openness and started talking with fost/adopt parents about openness, I realized that, although people assumed that closed adoption is the historical norm, it really only became common after World War II. I heard the fears that prospective adopters had about openness–and many of their fears were the result of underinformation or misinformation. I started feeling a strong desire to help new fost/adopt parents overcome their fears about openness, understand it more broadly, and commit to act in the best interest of their child.

How did you start blogging?

When I left California, I wanted to create a reference book for adoptive families which would cover the ways movies touch on adoption; I sat with most of my co-workers and they helped me come up with a list of movies that touch on adoption. In an effort to reach more people, I started putting my movie reviews online. I’m really glad I did this, for a few reasons. First, it’s connected me with a lot of excellent writers and good people, from whom I’ve learned a lot. Lori at Lavender Luz was one of the first to show me how the blogging world works, and Amanda at The Declassified Adoptee and Shannon LC Cate at Peter’s Cross Station both wrote articles which I found early on, which impacted me and shaped some of my thought about adoption. Blogging also encourages me to be current–initially, I’d planned on reviewing movies that overtly focused on adoption, and most of my focus was going to be on older films. The “immediate” nature of the Internet has encouraged me to focus on new-release movies. Through this, I’ve realized that movies don’t have to talk about adoption in order to be relevant to adoption–themes in many movies–identity, loss, definitions of family–are all relevant to adoption. I think, too, that families are more likely to catch a movie at the theater than they are to go on Netflix and rent some 40-year-old movie that they’ve never heard of, so I’m hoping that blogging has helped my site be a bit more useful.

How has the online adoption world influenced you?

It’s influenced me a lot more than I thought it would. I believed in the importance of openness in adoption before I started blogging, but blogs like Chronicles of Munchkin Land (now closed), Statistically Impossible, and Laura Dennis’ blog have increased the sense of passion with which I feel the importance of openness, and they’ve also challenged me to consider ethical dilemmas in adoption. Foster-adoption was the only adoption area in which I had professional experience before I started blogging, and the online community helped me learn about the different experiences of domestic and international adoption and the experiences of birthparents, adult adoptees, and adoptive parents in different stages of their journey. I’m being shaped by what I read, and I hope that my writing and my practice are more sensitive and informed because of it.

If a reader were going to read just one post on your blog, which would you choose?

Going back to one of the impacts that blogging has had on me… “Beasts of the Southern Wild” isn’t about adoption at all, but I reviewed it because it was current. And I was blown away at how much I was touched by the movie. It stirred some thoughts in me about the ethics of “imposed help.” That’s relevant to me as a social worker, but it’s also (in some ways) relevant to adoption. That review spurred another post, “12 things you can do to make sure your adoption is ethical.” And those two posts are probably the ones of which I’m the most proud.

Favorite book: C.S. Lewis’ That Hideous Strength and The Last Battle are two of my very favorite books. I also read lots of comic strips–one of my favorite Christmas presents was the complete set of Calvin and Hobbes!

Favorite thing to do in your free time: I relax by cooking, which is the closest I come to art. I do love going to the movies, and I like taking joy in small things–I read cookbooks for fun, I take batting practice at a local batting cage, and I make it to an old-school arcade a couple times a month to play pinball. I love watching movies with my wife; she and I even have the same favorite movie (which I haven’t reviewed yet, by the way…) The Princess Bride!

Thank you so much to Addison for answering our questions! You can check out past interviews with other bloggers from the Open Adoption Bloggers blogroll here. Have a blogger you’d like to see us interview? Let us know!

About the author:
A mother by open adoption, Heather Schade is the founder and editor of Open Adoption Bloggers. She writes at Production, Not Reproduction.

4 thoughts on “Meet Addison of Adoption at the Movies” 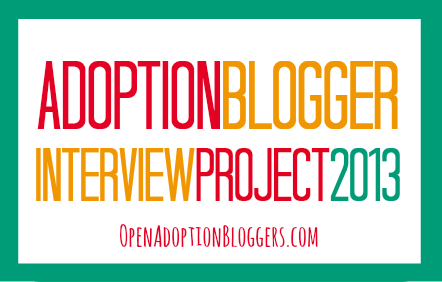 Lately on the blog 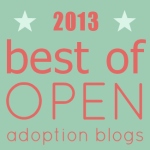